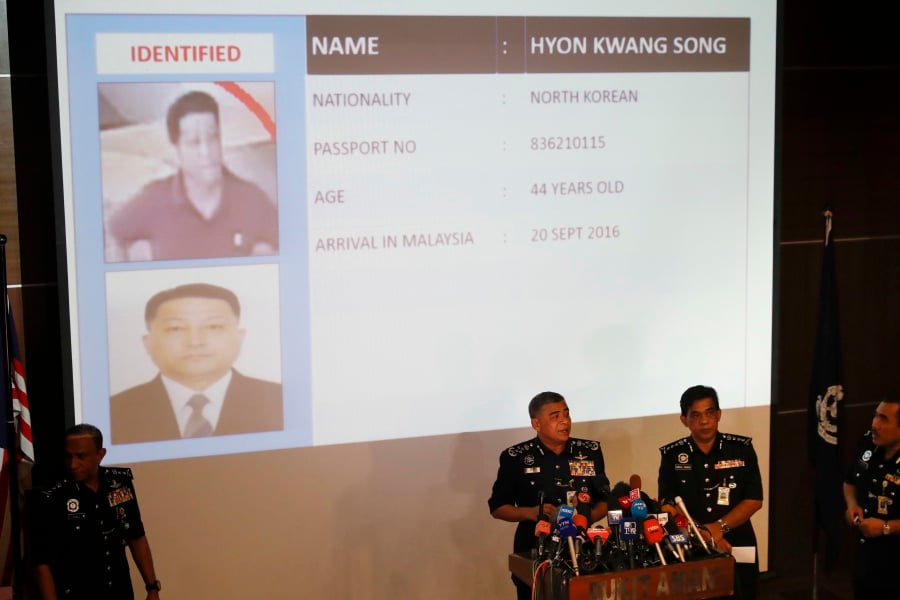 TOKYO: Malaysian police investigating the killing of North Korean leader Kim Jong-Un’s estranged half brother believe they know somebody who might help them solve one of the most bizarre murder mysteries they have ever faced.

They know his name, his nationality and have a pretty good idea where he’s holed up.

The problem is he’s a North Korean diplomat.

It’s unusual for any country to simply hand over a diplomat, no matter the alleged crime. Two years ago, for example, a Saudi Arabian diplomat accused of repeatedly raping and abusing two Nepalese maids left India under cover of diplomatic immunity.

But for North Korea, in particular, the line between immunity and impunity can seem to be a pretty fine one.

Take the 2015 case of the first secretary of North Korea’s embassy in Bangladesh, who was found to be carrying a diplomatic bag full of 170 undeclared gold bars worth an estimated US$1.4 million. He was arrested but later released, with no charges filed, and left the country. The following year, another official at the same embassy was asked to leave the country after an attempt to smuggle a shipping container full of 1 million cigarettes and electronics worth another US$1 million.

Last year, a report by the Global Initiative Against Transnational Organised Crime said a South Africa-based North Korean diplomat may have been involved in smuggling rhino horn but managed to evade charges because of his legal immunity.

Malaysian police investigating the killing of Kim Jong-nam in an airport lobby on Feb 13 are seeking seven North Korean nationals in connection with the case. Most have left the country, but authorities say they believe three — diplomat Hyon, an employee of Air Koryo, the country’s flag carrier, and a person named Ri Ji U — remain.

If so, it’s not hard to imagine where they might be: the North Korean Embassy, a plain, yellow two-story house in an affluent neighbourhood just 10 minutes from downtown. A large group of journalists and photographers has camped outside the embassy since news of Kim Jong-nam’s killing broke.

Whether they are indeed at the embassy is anybody’s guess. Police can’t check because to do so they need permission from North Korea, which so far has said absolutely not and suggested the investigation is a witch hunt inspired by some unnamed foreign power.

“If you have nothing to hide, you do not have to be afraid,” he said. “You should cooperate.”

But that’s not what international practice says.

The Vienna Convention on Diplomatic Relations says a foreign diplomat is “inviolable” and is not liable to any form of arrest or detention. It says the host country must treat a foreign diplomat “with due respect and shall take all appropriate steps to prevent any attack on his person, freedom or dignity.”

It also adds that “a diplomatic agent shall enjoy immunity from the criminal jurisdiction of the receiving state.” That can only be waived by the diplomat’s own government.

Because of allegations the North uses its embassies abroad to make money for its nuclear and missile programs, United Nations sanctions now call for vigilance against North Korean diplomats engaged in illicit activity. All member states are required to reduce the number of staff at its diplomatic missions and consular posts and limit the number of bank accounts each can have.

Even so, few things are more established in the way the diplomatic community around the world conducts its day-to-day business than the concept of diplomatic immunity — the essential freedom of diplomats to travel and conduct their duties without the fear of being arrested or harassed for political reasons.

But while diplomats aren’t always the perfectly law-abiding citizens that we might hope, when diplomatic immunity and the realities of a criminal investigation butt heads, local police tend to have the weaker hand.

And that doesn’t bode well for Malaysian investigators hoping North Korea will open its doors.

“If he is a Korean diplomat with a diplomatic passport, then he has immunity no matter a criminal case or otherwise,” lawyer Sankara Nair, who has handled several cases involving diplomats, told The Associated Press in Kuala Lumpur. “The police can apply any warrants they want but it can easily be set aside by the embassy.”–AP